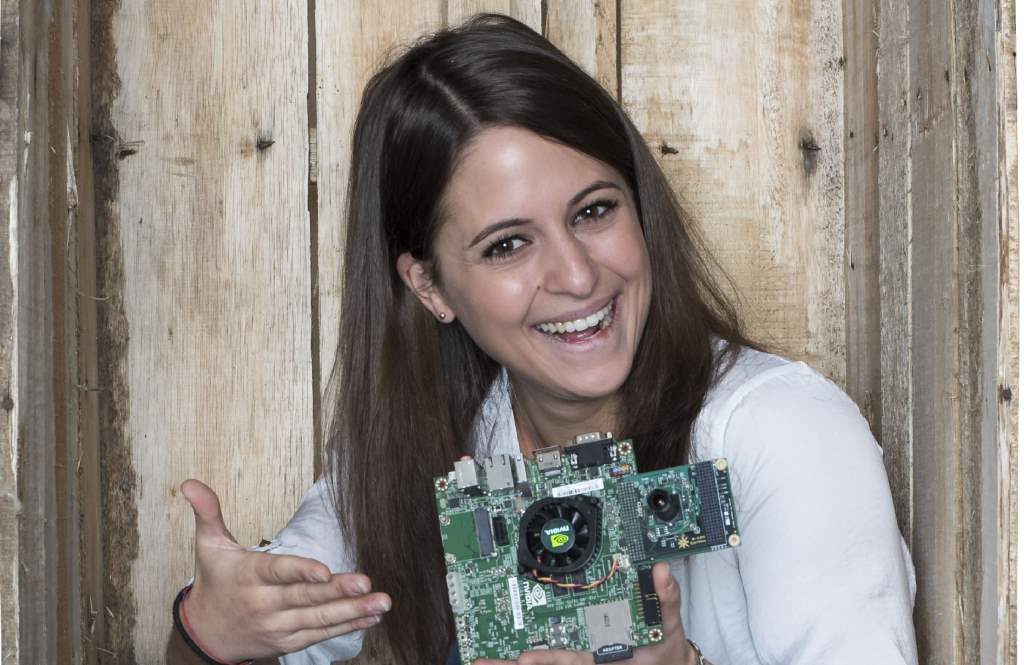 Jennifer Simonjan’s work focuses on camera networks. In conversation with ad astra she tells us why she does not fear ubiquitous camera surveillance, what she recently learned in Atlanta about nano cameras, and what it took for her, a first-generation student from an environment that was hardly technologically-minded, to gain her current position.

For a long time, there was nothing to indicate that Jennifer Simonjan might one day become an engineer, the predoc scientist tells us during the interview. She was not one of those children who owned a computer from an early age or who spent a lot of time playing computer games. Her parents, the Bulgarian father lives in Germany and the Austrian mother lives in Carinthia, do not have an academic background. Nonetheless, at school Simonjan was quick to notice: “Maths is easy for me.” Once she had completed her secondary vocational school (HBLA), she opted for a degree in Information Technology in Klagenfurt. What followed was “hard work”: “During the first three semesters, I barely understood a word in the courses that were also attended by numerous people who had completed a secondary technical school (HTL). But finally, the famous knot unravelled, and I suddenly understood the bigger picture. Since then, I have really enjoyed my subject and I cannot imagine doing anything else.”

Today, Jennifer Simonjan works at the university as predoc scientist and is a member of the working group assembled by Bernhard Rinner at the Institute of Networked and Embedded Systems. She specialises in camera networks, where cameras communicate with each other in order to achieve shared goals. “Let’s use an animal park as an example. The park management wants to know where the animals tend to be at which times. To help us establish the facts, we can install 50 cameras throughout the animal park. The objective of my work in relation to localisation in camera networks is to ensure that the cameras work things out by themselves: Who is my neighbour? Who can I transfer tasks to? Who is looking in which direction? These technologies should help to simplify the installation of camera networks.”

In order to pursue her work, Simonjan has built a simulator, which allows her to test algorithms for the camera networks. Over the past year she has worked on the so-called calibration algorithm, which calculates the ideal relations to the respective neighbours within the camera network. When we ask whether she finds the idea of a world full of camera surveillance unsettling, she states: “I do not feel threatened by it. Our research group is working on the protection of the private sphere in cameras. The idea is to ensure that the images do not leave the camera, and instead the camera simply files a report when something is conspicuous. This could have a beneficial application in technologies that allow the elderly to remain in their own homes for longer without putting themselves at risk. If someone were to stumble and remain lying on the floor for some time, the camera could transmit this information to family members.”

Recently, Jennifer Simonjan added a further area of research to her list of interests, after spending three months at the elite university Georgia Institute of Technology in Atlanta. She found the institution fascinating, not only due to its size, but also due to its comprehensive fee-funded offer for students. The research team she was assigned to in Atlanta worked, among other things, on nano cameras: cameras that are thinner than a single hair. Currently, nothing in this field is ready for the market. However, Simonjan firmly believes that the medical future, in particular, will belong to these extremely small cameras.

Jennifer Simonjan expects to conclude her doctoral degree within the next 12 months. What might follow is currently wide open: “I am not entirely sure what I want to do next. I do know that I would like to stay involved with research – either at a university or at an external institute.” The available opportunities always partially depend on one’s willingness to relocate to almost anywhere in the world. Simonjan knows: “For a limited period, I’d be happy to go absolutely anywhere. I love the international exchange, and it is unbelievably exciting to get to know the boundless academic world. But: At some point I want to build a home here in Carinthia.”

In her field of research, there seem to be limitless possibilities waiting to be discovered. Yet those who think that things are easier for a young woman in a setting where the technical faculties perpetually strive to meet quotas (for women), are mistaken: “Some believe that everything is simply dropped into your lap. I worked hard for this. And unfortunately, I sometimes find myself doubting: Are they addressing me as an engineer or as a female engineer? Ultimately, the only thing that should count is good scientific work.”

A few words with … Jennifer Simonjan

What career would you have chosen, if you had not become a scientist?
Probably something in the world of the arts (e.g. drama) or organisation (e.g. event management).

Do your parents understand what it is you are working on?
I think they do, on an abstract level. If not, I will smuggle in this article, hidden amongst the morning papers.

What is the first thing you do when you arrive at the office in the morning?
I drink coffee and read my e-mails.

Do you have proper holidays? Without thinking about your work?
I don’t manage to shut out work completely; I still think about work, about my doctoral thesis, and I remain available to colleagues and students via e-mail. Still, I manage to relax and enjoy my holidays.

What makes you furious?
Bad coffee and miscommunication.

What calms you down?
Spending time with friends and family.

Who do you regard as the greatest scientist in history, and why?
There are many outstanding scientists who fascinated me when I first learned about them at school. To me, the most remarkable ones are those who managed great things despite having few means, and who managed to retain their humanity despite everything.

What are you embarrassed about?
My fear of negative responses.

What are you afraid of?
Losing people who are important to me and making poor decisions.

What are you looking forward to?
Exploring the world, making fascinating new acquaintances, and finding out what life has in store for me.