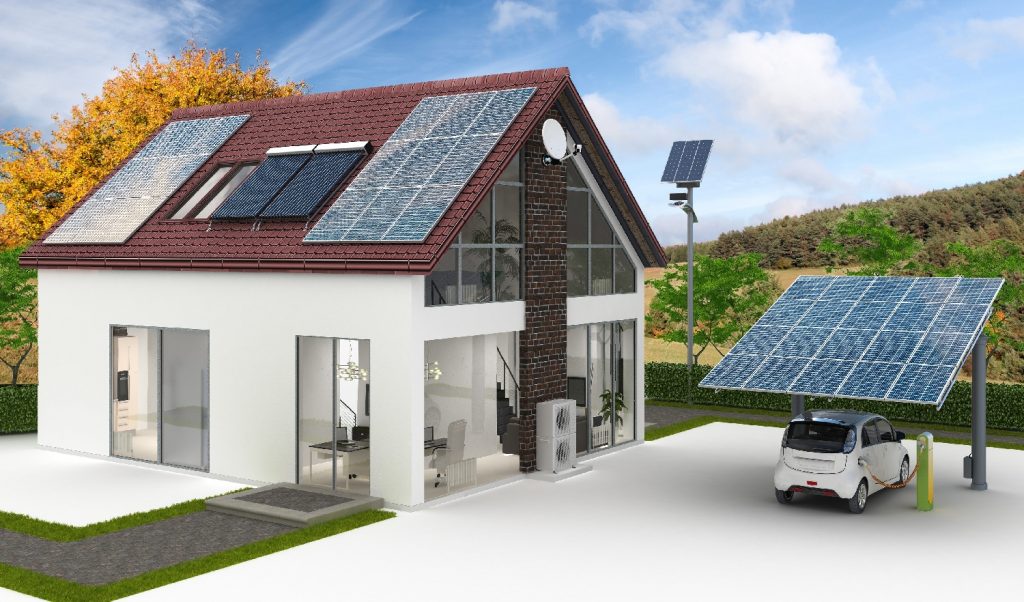 Austria has set itself the target in computational terms to cover 100% of total electricity consumption from renewable energy sources by 2030. Photovoltaics, wind and hydro power will serve as driving force. A conversation with smart grids expert Wilfried Elmenreich about the intelligent management and optimisation of renewable energy.

Photovoltaic systems make an important contribution to sustainable power generation, and the acceptance is very high, especially among private households. Thanks to the drop in prices for photovoltaic systems in recent years, coupled with corresponding subsidies, the proportion of renewable energies is rising, particularly in the production of electrical energy. Wilfried Elmenreich, professor for smart grids at the Department of Networked and Embedded Systems, explains as follows: “The availability of wind and solar energy depends on the weather conditions. The weather determines if we can produce more or less electricity. We can neither bank sunshine nor book it in advance. The output curve of photovoltaic systems does not really correspond with the consumption patterns typical of our society.”

During the summer months, photovoltaic systems produce more solar power, usually around noon on sunny days, while consumption often tends to be heaviest in the evenings. So, what happens to the excess energy produced? One solution Elmenreich can see, is to feed the excess capacities into the public power grid through storage power plants, or to store energy produced locally by photovoltaic systems for use at a later date. He feels it would be a great pity to waste valuable energy.

Elmenreich feels that the process of charging electric powered vehicles promises potential: “Electro-mobility is set to increase, which provides an opportunity for control. For instance, by delaying the charging cycles of a vehicle that has been parked for a long time, we can offset peaks in power consumption.” Elmenreich has a critical view of the notion of vehicle to grid technology, returning electricity to the power grid profitably in times of increased energy demand. “This would be at the expense of the charging cycles of the costly battery, which has been specifically optimised for vehicles in terms of its weight and performance.”

All of these solutions need an intelligent energy management system that connects the individual systems to each other: smart grids. “To put it simply, these intelligent systems allow us to establish a communication between the energy producer, say a thermal heat pump, and the network state”, Elmenreich explains. It is possible to set the consumption of a heating system, which is usually automated in modern homes, in such a way that energy is consumed, i.e. the radiator is switched on, precisely when there is excess electricity available and therefore it is relatively cheap. To make this work, it is necessary to equip the individual devices with controllers.

When asked how the system can determine whether or not electricity is cheap at the moment, Elmenreich responds: “The old electricity meters are not up to the job and as far as the customers are concerned, there are no varied electricity tariffs yet.” It is only with the introduction of smart meters, that it has become possible to detect which of the household’s devices were operational at which times, and how much electricity they consumed. Based on the smart meter technology, communication with the terminal devices allows consumers to discover when would be a money-saving time to use electricity. The challenge Elmenreich sees, is that old systems need to be compatible with the new systems. “We need solutions that can function well with future technologies, but that are also backwards compatible. No-one should be at a disadvantage, be it due to architectural structures, or to old electricity meters.” Answering our question about his assessment of the future of renewable forms of energy, Elmenreich responds: “Energy consumption will continue to increase and, at least on paper, in Austria it will be covered entirely by renewable energy. By extracting energy from hydropower, we have taken up a good starting position, and have already managed to reach a high level.”

Wilfried Elmenreich is professor of smart grids at the
Department of Networked and Embedded Systems.
For research purposes, this department and the Lakeside
Labs organisation have been jointly operating a small
photovoltaic system on the roof of one of the Lakeside
Park buildings since 2012. Moreover, his research group
analyses to what extent the photovoltaic yield is better
at other altitudes, for example on the slopes of the
Dobratsch mountain.