The electric power grid is currently undergoing an evolutionary step towards the smart grid. The smart grid is an enhancement of the electric power grid with information and communication technology. This digitalization will enable a bidirectional flow of energy and information within the power grid and provide several novel applications and unlock the full potential of renewable energy technologies. To cope with the challenge of digitalization in power grids, critical elements of future energy systems have to be explored, and computational methods are to be developed and refined. The power grid faces digitalization at all levels, key challenges, risks, and chances for future systems. The research branch of Energy Informatics investigates the analysis, design, and implementation of future energy systems. It aims to provide sophisticated computational methods to increase the energy efficiency of demand and supply systems.

The analysis of power meter readings allows researchers to discover solutions to increase the energy efficiency of energy systems sustainably. In some cases, however, synthetic data can serve as a viable alternative.

“With SynD, we present a synthetic energy dataset emulating the power consumption of residential buildings. The dataset is freely available and contains 180 days of synthetic power data on aggregate level and individual appliances. SynD is the result of a custom simulation process that relies on power traces of real household appliances.” explains Christoph Klemenjak.

Said dataset is the outcome of a measurement campaign in two Austrian households, where the characteristics of 21 electrical household appliances were captured, having the goal in mind of obtaining representative power consumption patterns.

The networked power meter (smart meter) is a key element in the transition towards the Smart Grid since such measurement equipment provides feedback to the inhabitants, other appliances, and the electric utility. Smart meters are a vital tool for researchers to record the energy consumption of households and industrial buildings. Based on the collected data it is possible to evaluate computational methods and evaluate if energy efficiency measures are effective. We developed an open-hardware smart metering board called YoMo, an extension unit for the Arduino platform. The YoMo is designed to monitor current flow, voltage level, as well as active, reactive, and apparent power at the feed point of households,” as he continues. In general, smart meters serve several purposes: billing of consumed energy, providing immediate feedback to the inhabitants, or switching loads.

With the development and introduction of smart metering, the energy information for customers will change from infrequent manual meter readings to fine-grained energy consumption data. On the one hand, these fine-grained measurements will lead to an improvement in consumers’ energy habits. On the other hand, fine-grained data provides information about a household and households’ inhabitants, which are the basis for many future privacy issues. To ensure household privacy and smart meter information owned by the household inhabitants, load hiding techniques can obfuscate the load demand visible at the household energy meter. “We developed a novel load hiding technique called load-based load hiding (LLH). An LLH system uses a controllable household appliance to obfuscate the household’s power demand. “ states Professor Elmenreich.

Photovoltaic (PV) systems have received much attention due to their efficient conversion of usable solar power into electricity, which benefits the environment. Solar energy is secure, clean, and available throughout the year. Hence the researchers are exploring more in this domain of integrating solar energy with the power grid to achieve sustainability and reliability in the smart microgrid.
“Forecasting the PV output power of smart microgrid is essential for efficient use of an electricity grid. “ says Ekanki Sharma. She is currently working on different aspects of solar power forecasting techniques.

The team lead by Elmenreich investigated how computational methods and principles can assist in planning smart microgrids.
“In a recent case study, we trained a neural network with sensor data as well as energy production data of renewable energy plants. The results indicate that neural networks can forecast the production of photovoltaic and wind power plants, “ – reports Professor Elmenreich.

In order to analyze the impact of added renewable energy sources on the microgrid variables, power flow analysis is essential. The proposed software allows calculating the power generated by each source in the microgrid and then conducts a power flow analysis. RAPSim is designed for use in science and in education with a simple to use graphical interface. It is an easily extendable framework that supports users in implementing their models, grid objects, and algorithms for grid control. 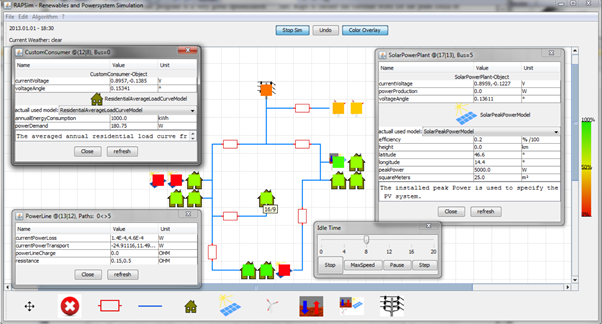