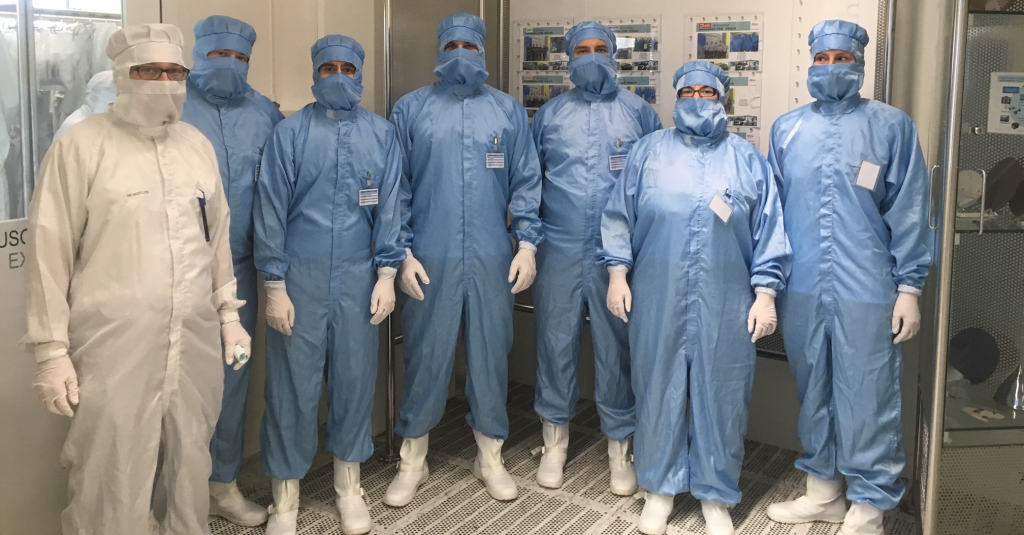 The photo above is not from a meeting with extreme COVID protection measures but a visit to Infineon’s semiconductor fab at the beginning of our project SWILT (Swarm Intelligence Layer to Control Autonomous Agents). After three years, this research project has now come to a successful end. The SWILT project addressed agent-based swarm modeling, focusing on production scheduling in an industrial use case. Since the problem sizes in these use cases are extremely large and traditional pre-calculated schedules or transportation tables are not sufficient, the innovation is to use swarm algorithms with reactive local rules on individual agents, which are able to compensate for dynamic changes in their local vicinity.
In a case study, we modeled production scheduling in the semiconductor industry as a swarm problem. We applied several nature-inspired swarm algorithms to the problem, among them an artificial hormone system, an artificial bee colony algorithm, an algorithm inspired from the foraging behavior of ants, and an algorithm based on the mechanisms of the social amoebae known as slime mold. The algorithms have been evaluated via simulation in Netlogo, a multi-agent programmable modeling environment especially suited for swarm experiments.
Simulations indicated that the overall performance of a large production scheduling system could improve in the single-digit percentage range, which amounts to significant financial gains for a large fab. In addition, the proposed algorithms have the advantage of being less resource-hungry than other approaches and thus can be deployed in a run-time environment.
Further information about our results can be found in the publications:
While the project closed successfully, our research on the topic is still ongoing, stay tuned for further updates!